My new Apple Watch was delivered yesterday, June 8th.  The exciting development was that it ended up shipping almost a month earlier than estimated. 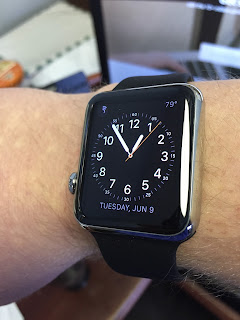 Full disclosure: when the device was announced in September 2014, I was dubious as to its necessity. With all of the devices we own, from computers, to laptops, to tablets, to smartphones, how would - how could - a watch fit into the fold?  Add this to the fact that most people who came of age in the computer era have never worn watches.  When you want the time, it is rendered to you upon a quick smartphone swipe.

But this is supposed to be the dawn of the wearables era, the IoT (Internet of Things) epoch where every part of our lives are hooked to the internet and collaborate algorithmically to make our lives better, efficient, and more fulfilling.

With the initial failure of Google Glass and a wearable that sits directly in your visual field, the watch and the wrist have become the main battleground.

As a technology early adapter, I grew more and more compelled to jump in at Apple Watch 1.0.  I knew the downsides, and knew that if I waited for 2.0 I would probably be much happier with the resultant product.  Then I thought about the fact that my birthday is in July, and that it is always so difficult to answer the question "what do you want for your birthday?"  The Apple Watch made a lot of sense.

As with any 1.0 release of a product - especially one that is predicated on outside innovators developing atop its platform - the user-experience can feel barren.  There were a handful of outside applications at launch, but the majority of the experience on the Apple Watch is directed by Apple's own development of core applications.  Anybody with experience in Apple products can attest to the fact that once said products get rolling and iterating, Apple's own applications are usually relegated to a hidden folder.  This is not to say Apple is terrible at developing applications.  They are not.  But Apple has to make lots of diversified applications while also setting the rules of the platform and tending to their walled garden.

Outsider developers can focus on and improve one thing - say notes, word processing, music, photography, etc. - and have their bottom lines affixed to the success or failure of that single thing.  On top of that, there are thousands of other outside developers trying to gain market share at the same things.  This competition and continuous innovation breeds features that perfect these applications.  Apple simply cannot and should not compete at this level.  But, until all of the outside developers rush the platform, Apple apps are the only game in town.  And this forces you to test the experience without the full promise of what it will become.

I purchased the 42MM Apple Watch with black sports band.  The watch is heavier and thicker than I thought it would be.  When I look at the watch from the side it almost reminds me of an early generation iPod in an arm band.  This can be particularly noticeable when you are used to the thinness of the newer iPhones and iPads. 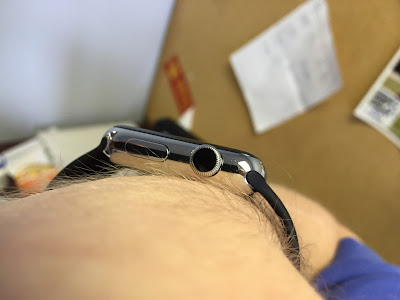 Again, I have not been a watch wearer of any kind for 20 years, so the size might be normal for a watch.  It should also be noted that the Digital Crown - a major feature of the device - basically matches the thickness (pictured above), so that is perhaps part of the reason for the thickness.  That said, for a modern Apple product, it certainly "sticks out."

I had looked forward to this as an activity tracker, particularly as it relates to vigorous exercise.  Before the Apple Watch, I used a Fitbit Charge.  The Fitbit is very subtle, small, and almost unnoticeable.  It tracked your daily steps, stairs, and sleep automatically, and had Caller ID (via BlueTooth).  Going from that to this - again, on Day 1 -   made the Apple Watch feel very noticeable.  It could purely be due to the fact that I was primed by the Charge.  As the days go on, I am sure I will acclimate to the Apple Watch's size.

With the Charge, though, I never took it off except to shower or to charge it (once every 7-10 days).  Nit-picky, but there are a few hours each morning where I play with my 7-month old son before work (and before showering).  This always includes walking him before his morning nap.  This walk can add up to hundreds of steps.  With the Apple Watch - which needs to charge off-wrist every night and, again, doesn't track sleep -  I am losing out on the tracking of those baby pre-nap steps.  Sure, I could put the Apple Watch on in that period of time, but it just feels kind of weird to do so when I'm in my pajamas and trying to avoid baby burp shrapnel, and will still need to shower.

As it relates to the vigorous exercise, like running, it feels big.  But as a comparison, I looked at other dedicated running watches (like the Garmin Forerunner) and those appear to be just as big.  This could be just another thing to acclimate to after a few days.  I'm sure Apple wouldn't create a watch with activity tracking being a major feature and have it be markedly bigger than the dedicated competitors.

Last thing on exercise.  I really like to play basketball, and for the past few years I have played every Monday night in a town recreational league.  Having a new baby this year kept me from playing even once, but I plan to hit the hardwood again next year.  With my various Fitbits, tracking has never been an issue.  With the Apple Watch, there is no way I can see using it when I play.  And that to me is a major flaw.  Some long (and winning) evenings on the court have yielded upwards of 6 miles-worth of steps!  That would be some major activity tracking left on the floor.  Why?  You can't wear a watch playing basketball: 1) if fouled across the arms, the watch could be hit and potentially damaged in a hard foul and that would suck for such a costly investment; 2) the watch could hurt competitors if you whip your arms around in the normal proceedings.  So you either have to carry around another tracker for basketball or other contact sports (and sleeping if that is important to you), risk damaging the watch or competitors by wearing it, or not track that major bit of expended activity.

I was so focused on getting the 42MM version because it seemed to be the "masculine" Apple Watch.  I am now wondering if the 38MM is the better option for these activity-tracking concerns.  Could you play basketball with that one? Does the 38MM feel markedly smaller than the 42MM, or is it just a perceived incremental difference?  Worth more exploration.

The watch will get better in future software and hardware iterations.  And, most importantly, if developers see consumers buying them in large numbers, those developers will dedicate the resources and mind-share to innovating on the platform.  News, email, notes, and messaging are all in the watch right now, but they just don't feel like the right mix of applications for the platform.  Someone will come up with the epiphany use-case and others will build on top of that and come up with their own "a-has."  Then it will be a virtuous cycle.