On June 30th Apple is set to unveil its streaming music service, Apple Music.  The service will initially be available to Apple users. In terms of what the service is, think Spotify: 30 million songs available on-demand for $10/month. There are some ancillary features, like curated playlists and a 24/7 radio station, but the crux of the service is the availability of all of those songs, albums, and artists at the tip - or tap - of your fingers, fully embedded into iOS. 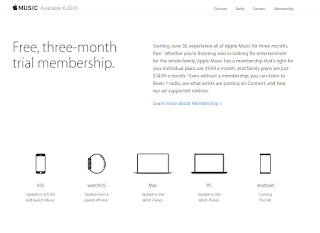 Unlike Spotify (or a handful of other dedicated competitors), Apple does not rely on the service for its livelihood.  Streaming music is just another alluring addition to its prominent ecosystem.  That said, it is jumping into a market that if all goes well it could actually dominate in short order.

Apple has 800 million iTunes accounts, with credit cards on file.

With as hard as Spotify has pushed to become the putative leader in the field, its overall user-base is less than 10% of all of those iTunes accounts.  There is no doubt that many of those iTunes account are not necessarily actively managed accounts purchasing digital media on a regular basis.  But, they are there and on file.

To kick things off in a big way, Apple Music will launch with a three-month free trial.  Imagine if even 25% of iTunes users opt-in to the trial, which will undoubtedly be prominently displayed on iPhones and iPads.  That would be 200 million accounts.  In one fail swoop, it dwarfs the Spotify user-base.

The three-month trial is smart for two reasons:

Which brings me to the crisis du jour.

Apple will ultimately disburse royalties to the music industry to the tune of 71.5% of money made from the service.  This is better than the industry-standard 70%.  However, it came out - through the very loud Tumblr bullhorn of Taylor Swift - that royalties would not be paid-out during the trial period.  Consternation abounded.  This caused Apple to alter course and announce that they now will pay out royalties during the trial period.

Taylor, we heard you loud and clear.

I'm not certain where to stand on the issue.  Of course artists need to be paid for their work.  But, Apple may end up being a savior again to the industry, bringing its considerable user-base to bear on a streaming market that has not exactly made money for anybody.  Is it not too much to ask artists to go along for three months?  It's not like Apple is making money yet either.

Let's say they even pay out half of their ultimate royalty percentage during the trial.  That would be about 36%.  What if a wildly successful trial brings in 500M users.  These users would be paying $10/month when the trial period ends, with $7.15 of that going out to the artists and labels.  With the presumed trial percentage, the cost going out would be about $3.60.

At 500M users, Apple would pay out $1.8B (as in BILLION) per month.  We know how much Apple makes per quarter, and how much money they have in their bank account, wherever that resides.  But $5.4B out - with nothing coming in - seems extortionate.

Apple is reportedly looking at 100M paying subscribers.  With that potential on the horizon, Apple would still pay out over $1B over the three-month trial (again, if 36% is the trial royalty percentage). And that is if the ceiling is 100M during the trial.  Based on Spotify's paid/free user breakdown, Apple's trial could see 375M signups.
Music industry folks think that not being paid during the trial would especially hurt artists who are releasing albums during the window.  But, once the three months are done, you lose access to those albums unless you start paying.  It would be a time-shifted inconvenience.  If users really love the albums, they will pay to keep the subscription going.  Otherwise, they don't have access anymore.

It is one of those arguments where the winner and loser are not evidently clear.